Almost two weeks have passed since the B.A.C.K. 2020 was held in Bavaria. The German judge René Blank has done in the last days a detailed review of one of his B.A.C.K. Agility course from the category and class Large 3. He share his thoughts on planning a varied and at the same time safe and challenging course with us and tells us also how some of the best teams of the world have managed his course. We attached the original post from him to you. 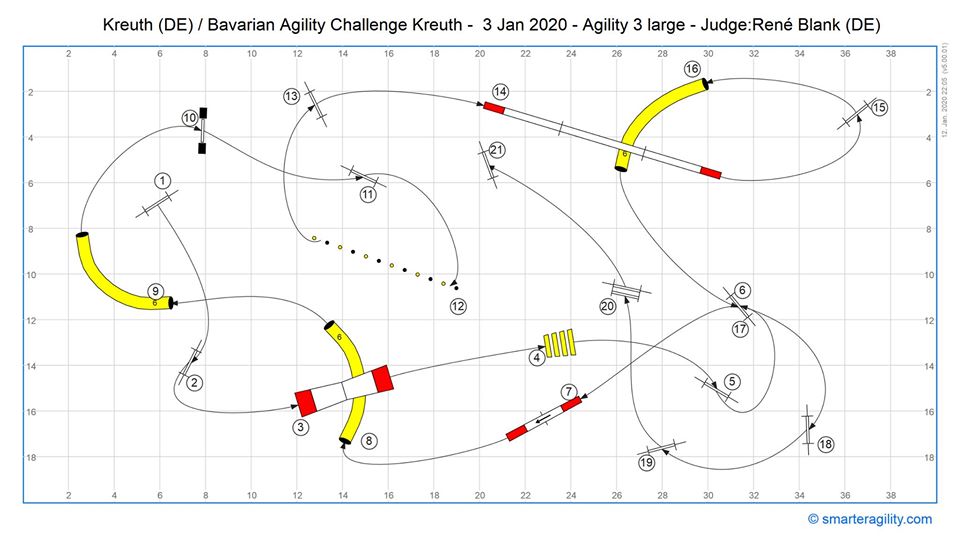 Reading the entries there was a class of approx. 280 teams. Many (most?) of them are well-known as top representatives of our sport worldwide. Handlers who have been very successful at AWCs and national tryouts, who have a reputation as brilliant trainers, who are experienced with mental pressure. And who are looking for … hhhmmm … challenges? So what to do on those 20×40 m? The goal was to put not 22 obstacles (which saves a couple of seconds per run) to meet somehow the schedule of the organisers. It should be a fast course with comfortable distances for the dogs, certain demands on the handler’s physical abilities and on their handling. And of course I wanted to see quite a few handling options (not to get bored when judging).

With these pre-conditions I wanted to put a first mark after the A-frame at no. 5. Most of the handlers (who survived no. 2 which wasn’t considered as an issue!) preferred handling the dog on the right side and pushed the dog with an “in” over no. 5. Quite a few did a blind after the a frame and handled an “out”. No. 18 wasn’t a discrimination at all, the dogs turned immediately and tightly. But back to no. 2: until now I have no idea why “felt” 30-40 dogs took the jump from the wrong side? I could understand if there’s a refusal because the handler wants to go ahead! But an elimination??? No idea what the dogs might have “read” from the handlers body language …

Ok, the front cross between 6 and 7 was mostly ok. Even if the handlers sometimes almost lost their way and position for the seesaw. So IMHO an early anounced blind cross would have helped better. But I’m aware that sometimes it’s about part of seconds you want to save. I was happy about the quality of the seesaws. The upcoming two tunnels haven’t been a problem.

After no. 9 many handlers did some … unreadable movements. Probably to get the dog close after the wall? It was clearly to be seen that many dogs first saw the handler’s right hand behind his back when leaving the tunnel. So they either missed the wall or did even no. 1 again. IMHO it was only due to the handler’s wish to give a verbal cue after no. 9 for preparing to call the dogs after the wall. And a lot of them stayed behind no. 1 and forgot (?) to make a step towards no. 10. The best (and fastest) line was intended to be a wider turn after tunnel to get the dog full speed and almost on a straight line to the “in” at no. 11. Fast handlers could have done this even surrounding no. 1.

For those who were late and/or struggled at the wall the real fight for the weave entry started now. On this particular spot I was asking for the technical skill at the weave entry – either with some help or competely alone on distance. Of course many refusals occured and sometimes no. 21 lead to elimination.

Once the dog was in the weave the handler could breathe a little bit before deciding on which side of the dogwalk he/she would like to run. I guess it depended on i) how the dog is able to handle no. 15 from the rear and ii) what is you preferred position after 16. Handling on the left side of the dogwalk keeps you behind of the dog (which probably takes his eyes from no. 20). Handling on the right side of the dogwalk the handler can pick up the dog closely after the tunnel. Reviewing the day this spot (16-17) was the most killing one. I got maybe a 100 eliminations there. Some verbal cues came when the dog already left the tunnel. That was too late at this speed. And even if the dogs got it and turned their heads towards the handler they stepped backwards for a front cross – and lead to dog over no. 20! It was strange to see how the dogs looked to the handler and then took the double jump. So the best way was from my perspective to handle clearly sidewards to no. 17. Either staying behind the jump or stepping in. If the movement was only clear enough to the side the dog followed easily. And moreover blind crosses looked easier than front crosses!

Going on some handlers were too reliefed that they have managed this difficult sequence and forgot to continue their handling. So the “out” at no. 18 was sometimes at the egde, sometimes the dogs took the jump from the wrong side. The more than 200 meters came almost to the end. So a few handlers tried to save (own) meters by staying behind no. 5. or they just wanted to make the cross between no. 19 and 20 relaxed. That mostly lead to refusals at no. 19. So once more the direction of the handlers movement decided about a smooth blind or front cross after no. 19. If the handler surrounded no. 5 the upcoming line was even clearer to the dog. A few handled the double jump with a rear cross which worked fine. Only in three cases the dog lost the focus on the final jump and got a refusal (two of them were clean so far).

Summing up the teams got “unexpected” problems on no. 2 and after no. 9. Almost none of the dogs took the discrimination after no. 5 and after no. 20. The rest was quite as expected. The only thing I would change next time is putting no. 19 more to the right to serve a better line to the double jump. With two meters more width I would relax the bulk of no. 4, 7 and 20. And I totally underrated the noise level in the huge hall. Anyway it was amazing to judge that level of teams and this huge class! If a team failed it was mostly only one step, one move, one verbal cue. I enjoyed all of you! Thanks to AJorge Pires for assisting (and reading the handler’s faces closely after the finish line) … Statistics: 259 teams, 16 clean, some more “felt” clean (with OFB or a silly refusal), 212 eliminations (well, some of them were just training after a fault/refusal but it could have been a few less).

Qualifying for the national teams …8 months ago

Just Moved And Dog Peeing In The …12 months ago

Dog sneezes a lot1 year ago

Your Running Contacts1 year ago

Size classes in Sweden and Finlan …1 year ago

Collapsable tunnel in your countr …1 year ago